…specifically, all thirty Major League Baseball Stadium ball games. Yes, as hard as it may be to believe, I have visited all thirty stadiums. And I did it in only eight months.

No two stadiums are the same. Fenway Park has the Green Monster. Wrigley Field has an ivy wall. Camden Yards incorporates an old train station. I could go on and on. My favorite part about visiting the stadiums was arriving right when the gates opened and seeing all that each stadium had to offer.

In the beginning, visiting all thirty was not a goal. I started in Atlanta, going to see a friend pitch. Right after that trip, I had a conference in D.C., but it was cheaper to fly into Baltimore. I left D.C. for a few meetings in Boston and then visited a friend in Chicago. Luckily, the baseball teams were home while I was in each of those cities. Since I was already there… why not catch a game? After that marathon trip, there was no going back- I was visiting the rest of the stadiums.

I left Knoxville (where I was living at the time) and flew to Toronto, Arizona, Seattle, Denver, and back home in five days. It only took studying schedules, a little manipulation of flights, a couple of long road trips, and an expedited passport to achieve my goal.

My love for baseball stems from being a daddy’s girl. Believe it or not, my Intellectual Property course and work as a student attorney in our Trademark Clinic ramped up my interest. I learned that baseball is a lot more than peanuts and crackerjacks. Teams meticulously create logos and other branding to grab the attention of fans. Trademarks are put on EVERYTHING! Balls, bats, shirts, hats, gloves- you name it. Over the years, teams change, add to, and create new trademarks, but they are always very careful to register them with the USPTO.

Here are my top five logos that are registered with the USPTO:

Not only is Fenway the oldest MLB stadium, but it’s also the most iconic, just like the Red Sox logo. There is not a single soul around that doesn’t know what the GREEN MONSTER is! Moreover, every game, in the middle of the eighth inning, the song ‘Sweet Caroline’ is played, and all fans sing along. You can’t help but smile, getting off the T at the Fenway stop and hearing all the chatter about Bahston, Fenway Pahk, and Clam Chowdah. It doesn’t get better than that!

Did you know that the ivy in Wrigley is rumored to have been planted by trespassers? Not only were charges not pressed, but they were offered jobs as grounds keepers. Whether it’s a rumor or myth, the legend lives on. Wrigley Field, like Fenway, is rather old and is the second oldest stadium in the MLB. When a game is in town, the city drops what they’re doing and heads to Wrigleyville. All TVs are playing the game, and everyone is supporting the team. Nothing beats rallying around a team together, and the bear cub in this logo is too cute not to include on my list.

One of my favorite things about the St. Louis logo is that the Cardinal is somehow both intimidating and cute. I don’t know how they achieved the look, but I like it. Also, from the stadium, you can see the amazing Arch. You get to watch America’s favorite pastime while taking in a great America memorial.

I am a nut for history, and the Phillies being in Philadelphia is icing on the cake. Before the game, you can take a walk through history. The incorporation of the Liberty Bell in this trademark with the shape of a baseball diamond… *chefs kiss*. This Phillies trademark is only one of two trademarks that encompass a baseball diamond in its mark. 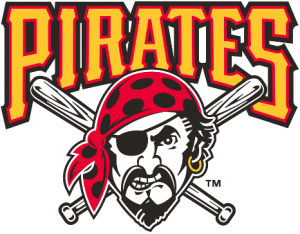 This trademark is only one of two logos that use a face in its design. Without trying, pirates draw people’s attention. I mean, besides casting Johnny Depp, Keira Knightley, and Orlando Bloom, what else did the Pirates of the Caribbean series do as great? People love pirates. The Pirate’s stadium is right on the river, and you can kayak the river and catch a home run ball like a real pirate.

Like these savvy MLB teams, you should make sure you are registering your name and logo ass well!

Counterfeits: More Annoying than a Mosquito on a Summer Night